BONZIE’s new album Reincarnation was reviewed in The New York Times in a long-form feature article by chief popular music critic Jon Pareles.  The article consists of snippets from an interview with BONZIE, quotes from legendary Chicago sound engineer Steve Albini, an overview of BONZIE’s discography, as well as musings on the new album Reincarnation.

In the article, Pareles writes:

“Nina Ferraro, the songwriter who records as Bonzie, had been working since 2018 on her third album, ‘Reincarnation.’ It would be the continuation of a fully independent career that has consistently yielded richly melodic and mysterious songs.”

“In ‘Slated,’ she sings about a lonely oblivion, intoning, ‘I hope that you will find me,’ as electronic tones ripple around her; in ‘Eternity,’ she fingerpicks quietly and repeats, ‘I wish that you could stay, but these things fade,’ as harp, orchestral strings and electronics materialize and vanish around her lustrous voice. But she ends the album with a hymnlike affirmation: ‘Come to Me.’ Floating on synthesizers and organ chords, she sings, ‘Hold you up/No fear/We are free.'”

“Like Bonzie’s other songs, ‘Come to Me’ isn’t simply topical, conceptual or autobiographical. ‘A lot of things go into the pot,” she said. “And then there’s some alchemy, and then the song comes out.'”

Click the below image to read the full piece. 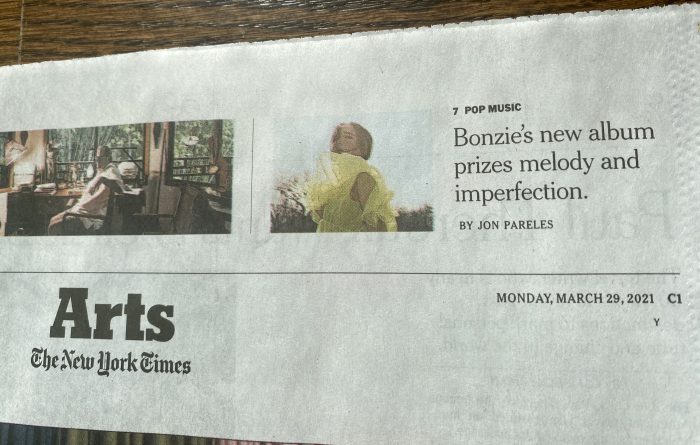